Makerspaces are showing up in schools, classrooms, and libraries around the world. Personally, I think it is great to see this movement taking hold. In some cases, I see it as a push back to the standardization of schools and over-reliance on a canned curriculum. I love when a student stops by our school’s makerspace to tinker with something. One kid, in particular, spends hours with me perfecting his 3D models of “beyblades”, which is something I have learned a great deal about this year. For him, the library makerspace is a refuge from the overwhelming space that is the rest of his school day. Bottom line, I feel as though these spaces are critical in schools and are of high value to a great many kids. Yet, I am becoming wary of mandating all kids participate in these spaces. 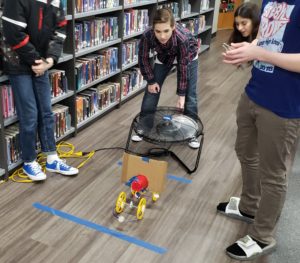 Yesterday I hosted a “Maker Day” for our 8th-grade students. It was a mandatory activity through their science classes. I have worked with the teachers to offer these days because I thought it was a great way to expose kids to a variety of tasks, tools and making experiences. However, some of the kids just were not digging in. They were hanging on the periphery and in some cases just being straight up off task and problematic. At one point in time, I had to redirect a group of boys who took our Keva planks and built what was clearly a memorial to a particular part of the male anatomy. Honestly, some of the kids just hated the activities I had set up and had no interest in making anything. It bothered me a bit.

Later that night, as I reflected on the day and what happened, I made up my mind that making may not be for everyone. My first mistake was being naive enough to think I could create a series of Maker Day activities that would appeal to all kids. Just as the maker movement pushed back on overly standardized schooling, by mandating maker activities/days, we run the risk of falling into the same overly standardized model. Yes, I believe in the power of making and creativity, but I know as with anything, it won’t work for every kid, every time. The key for me in the future will be to create a wider variety of activities and programs and let the kids pick what interests them. On top of that, I have to be fine with the idea that some kids won’t be interested in anything I come up with. For those kids, I just hope the weather is nice and we can get a great kickball game going. 🙂